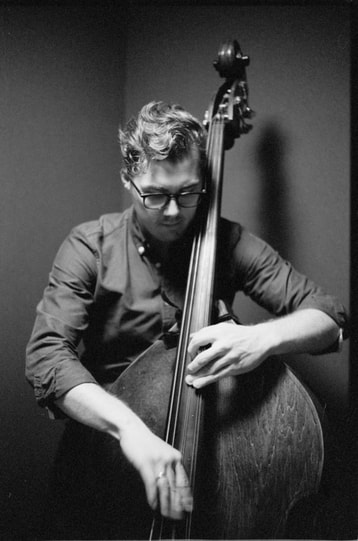 Alex’s musical life began early, fostered by his family, all of whom were active participants in the music and theater scenes of his hometown, Jamestown, New York. Still, it came as a surprise when he could be heard singing difficult chromatic melodies from "Phantom of the Opera" at age 4. When a 10-year-old Alex demanded that he start learning to play the electric bass, his mother, a pianist herself, insisted he also start piano as a part of his musical training. In addition to these two instruments, he went on to study alto, tenor and baritone saxophones, guitar, cello, viola, tuba, and joined the school choir. Alex was 14 years old when he finally shook hands with the double bass.

Alex has studied with world-renowned musicians. With degrees from the State University of NY at Fredonia and the Yale School of Music, and having served as Performer in Residence at Carnegie Mellon University, his teachers include Micah Howard, Donald Palma, Jeffrey Turner, and Harry Jacobson, on classical bass; with Jay Haser on electric bass, and studied jazz soloing with Bruce Johnstone. He has performed in master classes for many other world renowned orchestral and solo bassists. Alex was the first double bassist in the school's history to be awarded the SUNY Fredonia Performer's Certificate.

Historically-informed Period Performance Practice has been one of Alex's great passions ever since performing music of the French Baroque with Maestro & Professor Dr. David Rudge at SUNY Fredonia. Since then, Alex has had the distinction of studying and performing with the likes of Robert Mealy, Nicholas McGegen, Mark Bailey, Alison MacKay of Tafelmusik, the American Baroque Orchestra, the Yale Schola Cantorum, and collaborations with the Yale Institute of Sacred Music. When performing with ensembles like the American Baroque Orchestra and other period-instrument groups Alex uses an instrument set up with gut strings and an historically accurate bow. The use of these tools brings unique character, sound, and phrasing to this music, bringing the music back into the 16th, 17th, and 18th centuries. In this way, we breathe fresh life to the music in a way that is true to its origins.

As a Music Administrator, from professional symphonic stage management to supporting large-scale international tours, to design and structuring of educational programming, to fundraising, Alex has over a decade of experience in all aspects of arts administration. As Fellowship Director of the revived Vermont Mozart Festival, Alex designed, developed, recruited, and implemented a Fellowship program of young professional musicians. As stage crew at the Chautauqua Amphitheater, Alex helped to coordinate load-in, load-out, setup, and execution of musical & theatrical performances and religious services of all scales and sizes, including international touring rock acts. As stage manager of the Chautauqua Symphony, Alex led the logistics of full symphonic, opera, and ballet performances. As a board member of MOSSO (Musicians of the Springfield Symphony Orch.), Alex helps to coordinate media, publicity, outreach, and philanthropic initiatives for the organization, and heavily assists in performances and events planning. Alex has also served in the administration at Yale University in various roles, including development and as registrar specialist for one of the academic departments.

In addition to his active performing career, Alex is an active music educator. He teaches classical and jazz double bass as well as jazz theory, improvisation, and historical concepts. Alex has taught master classes and clinics in classical and jazz performance for double bass and mixed-instrument ensembles with Infinity Performing Arts, Signature Music Summer Camp, in Connecticut Public Schools across the state, and independently. In 2016, Alex served as the Fellowship Director of the Vermont Mozart Festival for its inaugural season, and was integral in the design and implementation of the program and festival concerts while serving as the bass voice for the VMF quartet. While at Yale, Alex served as musical director for the Yale Tango Orchestra, a group that gave educational concerts at local schools teaching about Tango music, dance, culture and history.